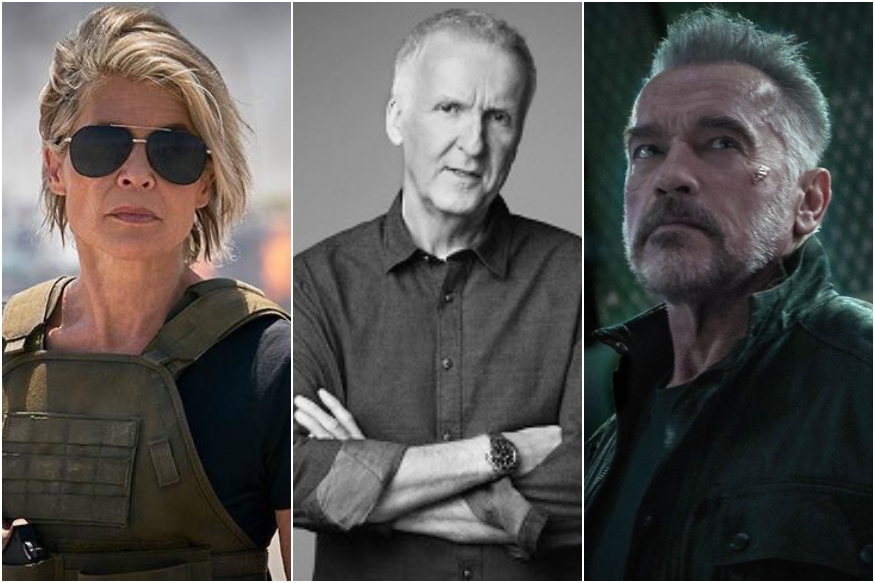 The teaser trailer for the much anticipated Terminator: Dark Fate has just dropped and the film is promising to be quite the scintillating ride consisting of action as well as nostalgia for audiences and fans alike. Despite being the sixth installment of the Terminator series, it serves as a direct sequel to 1984’s The Terminator and 1991’s Terminator 2: Judgement Day.

Set more than two decades after the events of Terminator 2, the film centers on Sarah Connor (Linda Hamilton) as she sets out to protect a young woman and her friends from a liquid metal Terminator sent from the future to kill them. The flick is directed by Tim Miller and produced by James Cameron.

In an recent exclusive interview featured on the ‘Flicks and The City Clips’ YouTube channel‘, James Cameron gives a detailed explanation on the film as well as emphasizing on the importance of bringing back two important characters from the original 2 movies.

Having known Hollywood sensation Arnold Schwarzenegger for over 3 decades and having worked with him in the first Terminator film, it’s sequel as well as True Lies, its safe to say Cameron and the actor have a close working relationship. It’s the latter that led to Cameron orchestrating the return of Arnold’s character when he was brought on to be a producer in Dark Fate.

He says, “One of my early contributions was to ask them to continue with Arnold, because there had been some discussion about the fact that we needed a whole new set of characters and so on and so I said, ‘Look, I’d love to be involved with this but I can’t be involved in a Terminator movie without working with my good friend of 35 years Arnold Schwarzenegger even if it’s to, sort of officially pass the baton to a new generation of characters.”

Additionally, just like Arnold, he wasn’t going to leave out his ex-wife Linda Hamilton, famously known for playing Sarah Connor in the series. Cameron termed it an attractive idea to bring Hamilton’s character back because she represents a unique and strong female character unlike has been presented before in cinema.

“I think that when you see the film, when you see Dark Fate, when Sarah comes into the movie, you just feel this amazing sense of ‘Okay! Here we go!, Here we go! She’s back, she’s bad, you know? And it was just such an attractive idea, I think, to us as the creative team on the film, you know,  Tim, myself, David Ellison and the other writers to bring her back because sure, there are a lot of female empowerment characters, you got Captain Marvel and Wonder Woman and you know, Black Widow, there’s quite a list. How many of them are under 40? Not too many, get’s to be a very short list.” He continues to say, “How many of them are over 60? Big fat zero! So we thought, alright, this is worth doing.”

Terminator; Dark Fate, according to Cameron, will be a retcon of the whole Terminator mythology, picking up where the characters from the second film left off. The film premiers on 1st November, 2019.

7 thoughts on “James Cameron on staging the return of original cast in Terminator; Dark Fate”