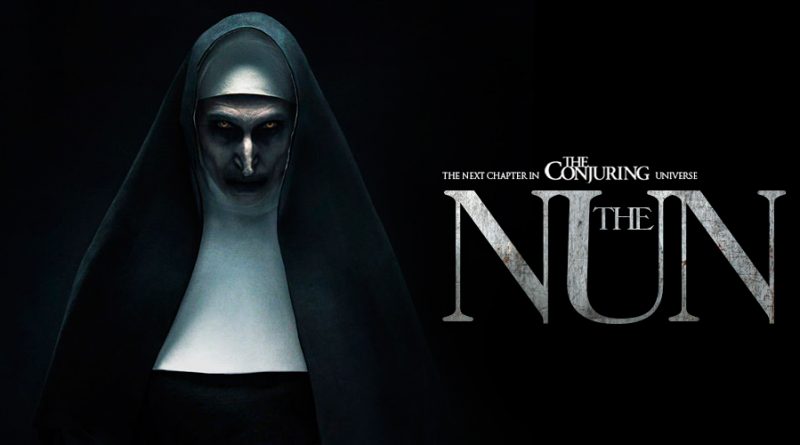 The Nun is a 2018 American gothic supernatural horror movie and is a spin-off of 2016’s ‘The Conjuring 2’. Directed by Corin Hardy, the plot pivots on a Catholic novitiate in Sister Irene (Taissa Farmiga) who alongside Father Burke (Demain Bichir) go on a paranormal adventure to uncover the mystery surrounding the unholy happenings in a Romanian chapel.

Taissa Farmiga has earned a reputation for being a contemporary scream queen in past movies so this particular one was bound to be a walk in the park for her, right? Well, not entirely. There was a lot of potential behind the youthful religious devotee who she plays which was not exploited to the fullest and that was a big shame; indeed it was. What I would say is that she extensively made the best out of her poorly written character and I am not surprised by it considering her previous works in her filmography. Sister Irene’s arc on here is confusing to say the least. The film did not give me a compelling enough reason to make me believe that her character is integral to the main plot in the 1st and 2nd Act but somehow it tries to convince me that her presence was undeniably crucial to what happens in the 3rd Act.

There’s a certain thing she does in the closing stages, I won’t mention it of course for obvious reasons, but it’s not something too extra-ordinary. It’s something one of the lesser characters would have done and thus as a viewer who is supposed to follow and connect with the characters based on how they are set-up, I can confidently say that I felt hard done by. It’s like the movie had been taking me for a nice walk in the park with her character only for it to throw me off a cliff that apparently lied at the edge of the latter.

On the other hand, Farther Burke had some depth to him but I disliked the manner in which his character is developed. It’s weak and lethargic to say the least. Much like Sister Irene, there was more to the Catholic Church emissary that I needed shown through a cohesive and interwoven story arc in the beginning before he sets off for his mission.

I was really disappointed that the movie decided to use the exposition path with him to explain how his various mystical experiences in the past lead him to what he had been sent to do in Romania ; it’s not even done well in the first place. They don’t spend enough time on it and that was a big let-down. However, Demain Bichir’s character is not entirely flawed; there are certain things that happen to him at certain points in the flick that I was drawn to. Additionally, his dialogue never felt out of place and that was likeable.

Bonnie Aarons reprises her role on here as Valak; the Demon Nun and for the most part, I didn’t have a problem with her portrayal. I give a thumbs up to the costume design and make-up department who were in charge of making sure that she is a convincing antagonist; she sold the fright and that is one of the major aspects that I needed to see in Aarons’ demented character.

Lastly, there’s a certain side character played by Jonas Bloquet called Frenchie. Long story short, he served his purpose in the story; that’s all there is to him, at least from my perspective. A purpose that is very clear in consideration to how the movie ends.

The Plot, Merits and Demerits.

In all honesty, I haven’t been the biggest fan of the Conjuring universe. I’m not necessarily saying that it’s not a good horror franchise nonetheless, I don’t like how prequel inspired some of them have been. I have a theory about all this though. I have reason to believe that the prequels are just a way for the associated production companies to maximize on the success of 2013’s ‘The Conjuring’ and its sequel by bringing in additional motion-pictures that are connected to the latter but not in a progressive way. This hence allows them more room to come up with more related stories in future which they hope will translate to lots of profits. I mean, that’s the main goal for any company, right?

The Nun falls perfectly into the trap of my theory and I say this on the basis of how familiar the plot is to its predecessors, or should I say successors. It doesn’t present anything fresh and unexplored because it’s too focused on being connected to the said universe without taking substantial risks. Risks that we can look at as audiences and say, ‘Wow! I didn’t predict that was going to happen the way it did!’ or ‘Wow! I didn’t know that character was going to do that!’ except for some few instances, and I mean few.

The flaws don’t end there. *The story is so dependent on dialogue to set itself up without taking us though it the right way. *A large portion of this movie takes place in an eerie chapel that houses the antagonist and the history surrounding both elements and how they are related is so ‘meeh’; I wasn’t moved by it as much as I would have if they went for something different. *The poor pacing of the movie and the poor character development work hand in hand in pulling down the plot into an abyss; certain events that should ideally happen in the climax section happen much earlier hence giving little to no room for the audience to best invest in the main characters.

*The editing is sloppy in some stages; the one that I took most note of is the instance whereby Farther Burke is struggling to fight off the demented nun. The montage is cut too quickly before I could internalize the weight of the duel and feel as frightened as I should have been.

That said, there are some positives I can say I enjoyed about the movie. *Despite the fact that I’ve come to know how and when jump-scares are going to happen given my experience watching the other movies in the franchise, I was genuinely surprised by some of them on here and they were legit scary.*The lighting, or rather lack of lighting was commendable; it set a good tone for the film and worked well in presenting an air of unpredictability of the eerie surroundings that Farmiga’s and Bichir’s characters are in. *The music is unnerving and gelled well with the scenes where they are employed. *Lastly, I think you’ll find the ending quite interesting, especially if you are a strong fan of the franchise.

When all is said and done, The Nun is definitely not a motion-picture that I’ll be gushing over at the end of the year as one of the most unforgettable of 2018 because it is the exact opposite of that. Yes, there are some select moments where I felt like I was watching a proper supernatural horror flick but in the grand scheme of things, I wasn’t impressed; and this is coming from someone who isn’t a disciple of the film’s genre.